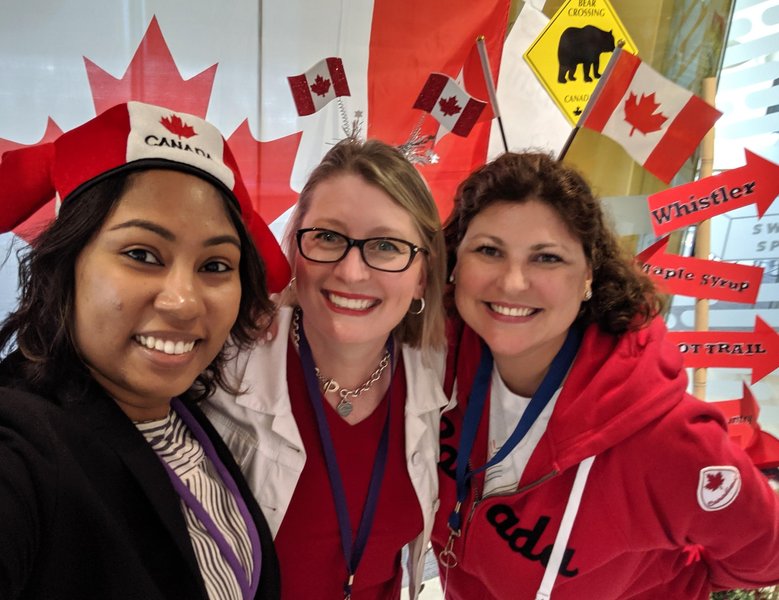 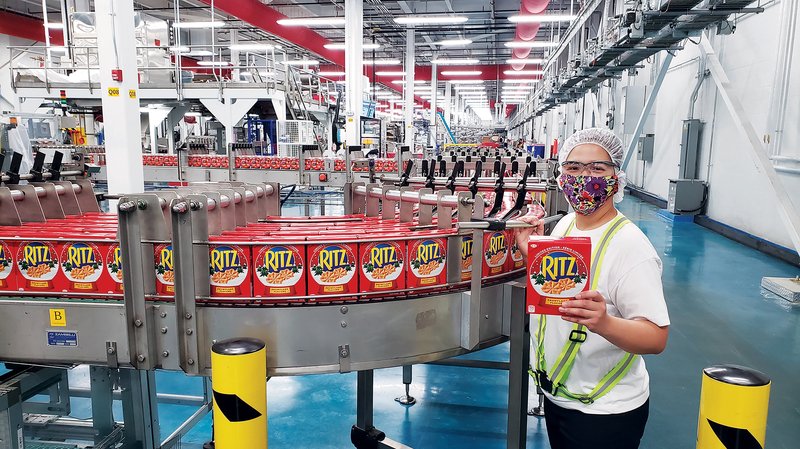 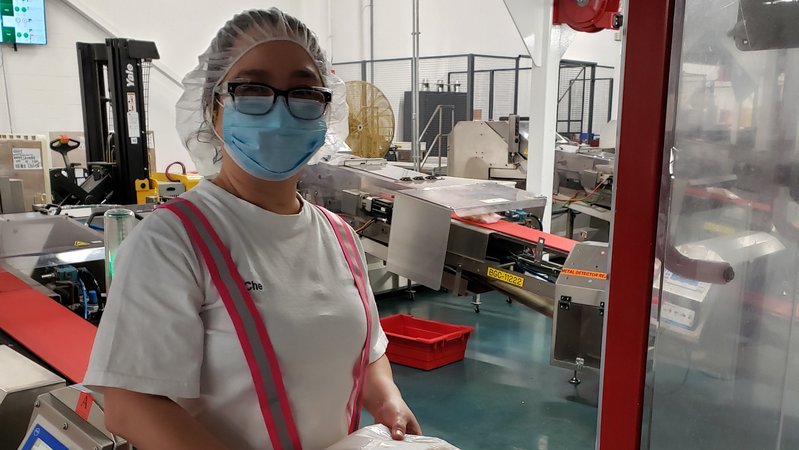 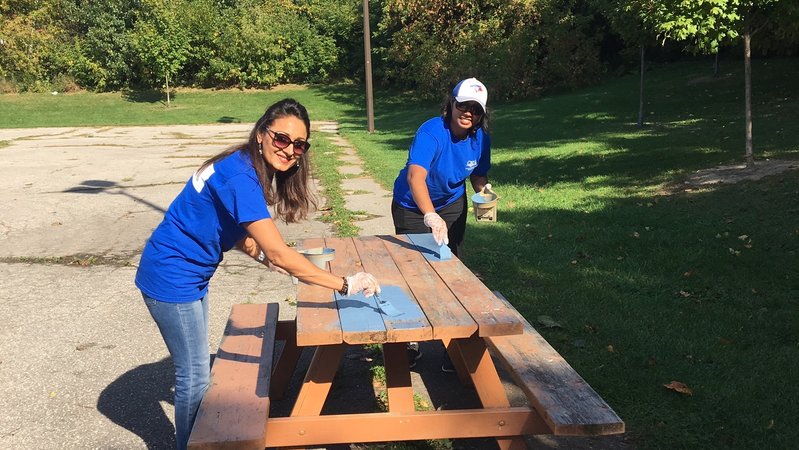 Mondelēz Canada employees help out in the community for Purpose Day

Who wouldn’t want to work in a cookie factory? Julian DeSilva was fine with the idea when he started working at a plant operated by Mondelēz International in the Toronto district of Scarborough in 2016. It made such sweet delights as Chips Ahoy!, Dad’s Oatmeal and Oreo Peanut Butter cookies.

But DeSilva found that, as he dropped dough into the system as a dropper operator, he was gaining a lot more from the experience than just cookie-love. Previously, he’d had a tough time working and getting through high school, only graduating at age 22. “I was in a bad place at that time.”

But at Mondelēz, he was struck by the positive, inviting environment, and by his colleagues. “Everybody here has made me a better person,” he says. “When I came here, things started looking up. Things got better.” Now, managers have told him he’s on track for a supervisory role within the next few years.

DeSilva’s experience especially makes sense when you hear the perspective of Martin Parent, president of Toronto-based Mondelēz Canada, who talks about the company’s focus on being values-led and creating a positive working environment. “Our three core values, which guide our business and our actions, are: We love our consumers and brands, we grow every day, and we do what's right.”

That last value is especially important in the workplace. In part, it includes a focus on fostering diversity and inclusion – “if we leave one person behind in the organization, everybody's left behind,” says Parent – but it also involves how people are encouraged to work together. “We expect people to deliver on their commitments, not just to the organization but to their peers internally and externally, which is important in building trust and building opportunities as we go forward,” he says. “For me, it all starts with putting people first.”

Doing what’s right also served the company well when the COVID-19 pandemic hit. “Very early on, we decided we’re going to be on the right side of right,” Parent says. “We’ll do what’s right to safeguard the well-being of our people.” By March 12, on-site nurses and screening were in place in the manufacturing plants, shifts were segregated, and employees working on the manufacturing lines were socially distanced. “We listened to our frontline workers and took important steps to keep everybody safe,” says Parent.

Another goal, he says, was to make sure that the Canadian public was able to still find their favourite snacks on store shelves. As Canada’s second-largest snack company, Mondelēz offers a wide range of global brands, including Cadbury, Oreo, Ritz, Toblerone, Dentyne, Triscuit, Mr. Christie and lots more, many of which came from the split of Kraft Foods in 2012 into two separate publicly traded companies, with Mondelēz International based in Chicago. (The Mondelēz name is designed to suggest a world of delicious treats.)

Ironically, perhaps, the do-right decision helped fulfill the other two values: sales increased during the pandemic as consumers sought out their favourite snacks for comfort, allowing the business to further invest in its long-standing community partners and give back to those in need.

“All in all, our pandemic response was very much aligned with our values,” he says. “I told the team, you are empowered to do what’s right. And I am so proud of how we showed up for our employees, our customers, our consumers and our communities at such a challenging time.” 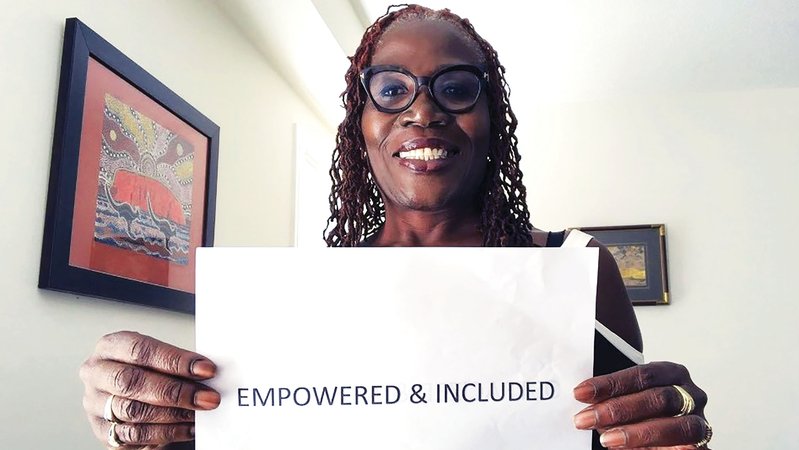 It started with a hallway conversation, as so many great ideas did in the days before the pandemic kept people away from their offices. At the Mondel󠄓ēz Canada headquarters in Toronto’s west end, Christian Baes ran into a senior leader on assignment from the U.S., who suggested that Baes start a Canadian network for LGBTQ+ employees.

That conversation led to the birth of the Rainbow Council Canada in 2017 and helped ignite a series of programs to build awareness and strengthen allyship for the LGBTQ+ community at Mondelēz Canada, home to such iconic snacking brands as Cadbury chocolates, Oreo cookies and Ritz crackers.

For Baes, that’s just one of many positive experiences he’s had since joining Mondel󠄓ēz Canada in 2013. After graduating from Western Michigan University’s Cooley Law School, he came to Toronto, fell in love with the city and joined Mondelēz Canada as a law clerk. He became a senior law clerk just a year later. Now, after articling with the Mondel󠄓ēz legal team, he’s a licensed lawyer and was recently promoted to the role of global marketing & media counsel.

Baes is an active member of the company’s Canadian Diversity, Equity and Inclusion (DE&I) Council, dedicated to building an equitable and inclusive culture. In addition to the Rainbow Council, Mondel󠄓ēz Canada has recently established a range of other Employee Inclusion Groups (EIGs), including the Women’s Network, the Black Colleague EIG, the Indigenous Peoples EIG, and the People of Colour EIG.

For Martin Parent, president of Mondel󠄓ēz Canada, DE&I is a critical part of the company’s values. “Our diverse, inclusive and connected community of colleagues is the key to our success,” he says. “As we focus on walking the walk, this summer we dedicated our annual Culture Day to diversity and inclusion and created a range of virtual opportunities for employees to connect, share their experiences and discuss our commitment to driving long-term systemic change in our workplace and society.”

The GTA is home for Mondel󠄓ēz in Canada – all its manufacturing plants are located there, where the company, whose name is designed to suggest a world of delicious treats, makes some of Canada’s most popular brands.

Amid the pandemic, Parent says, many consumers counted on Mondel󠄓ēz Canada and its brands for a sense of comfort and familiarity as families spent more time at home. During this time, the company also demonstrated its strong commitment to the community. This included donating over $1 million in food and cash to organizations like Food Banks Canada, Moisson Montréal and Boys and Girls Clubs of Canada, as well as providing more than 4,000 Oreo and Cadbury Easter treats as a thank-you to frontline healthcare workers in Toronto.

The company is also building for the future, actively working with Canadian universities to raise its recruitment profile and developing apprenticeship programs with local trades schools in the GTA.

“As we attract new talent, it’s important for our recruiting efforts to focus on what makes us passionate about our work: it’s the great people, brands and workplace culture that drive this team,” Parent says.

It was this environment that first attracted Baes to Mondel󠄓ēz, who notes that another great aspect is the chance to try new products before they reach the marketplace. But it’s the company’s people-first culture and being able to bring his whole self to work that’s the sweetest.

“To be able to build a community where I see myself and where I feel whole is incredibly gratifying on both a professional and personal level,” he says. “I don't know if I would have found that anywhere else.”