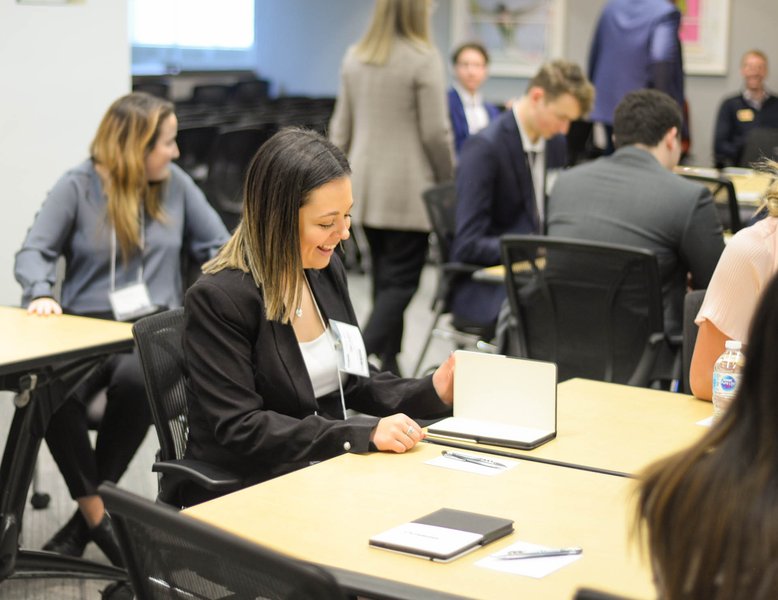 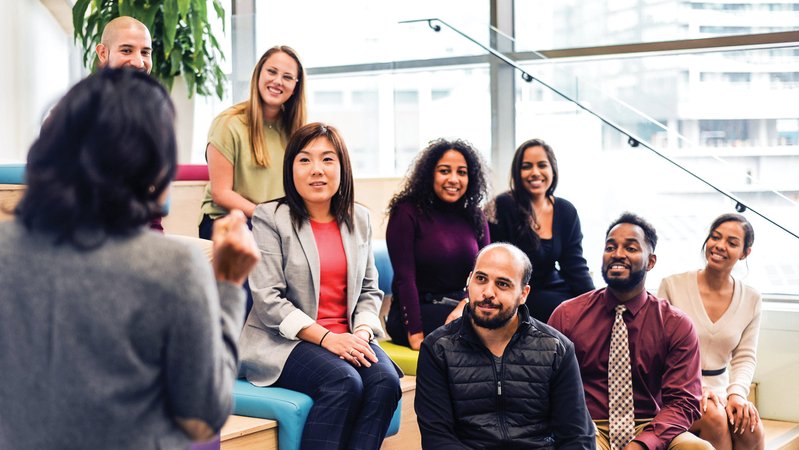 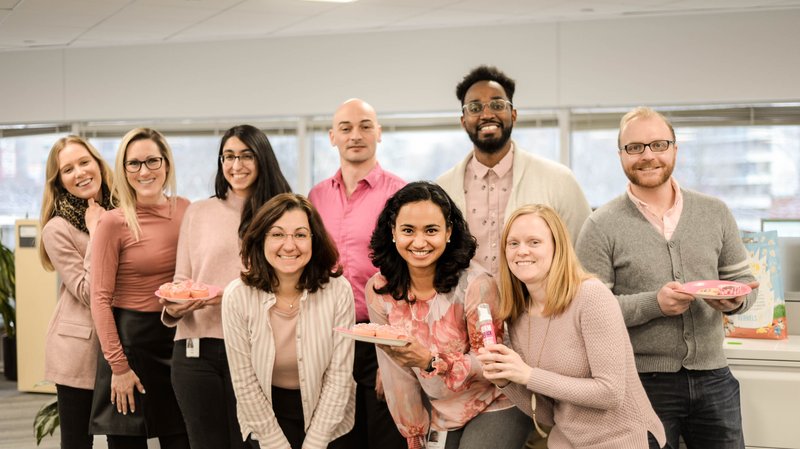 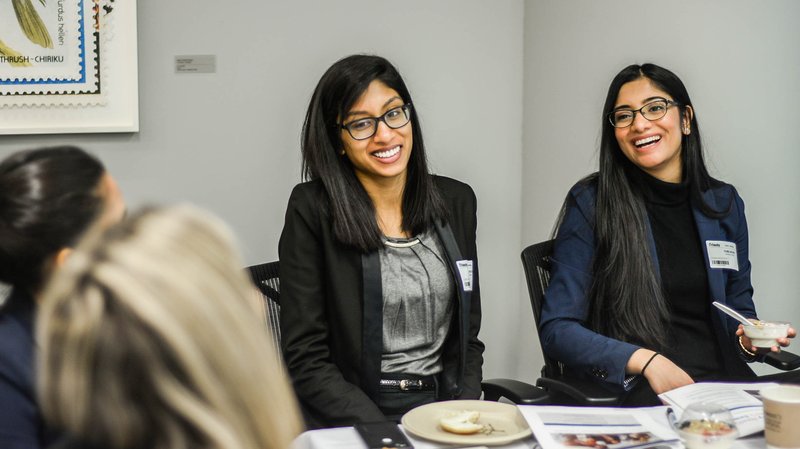 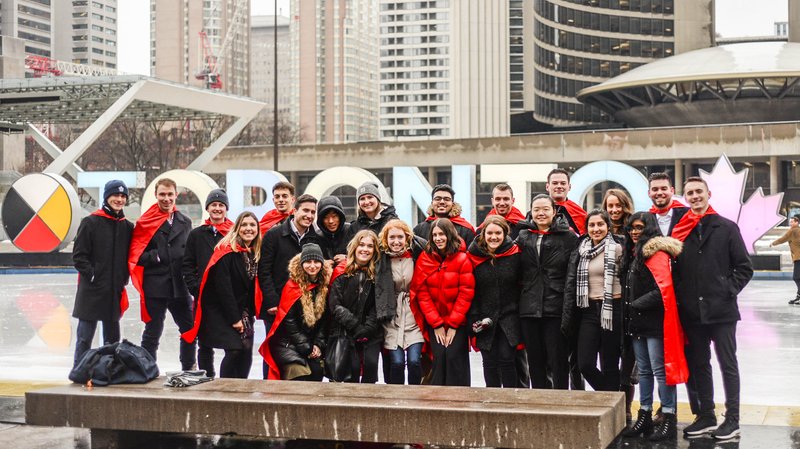 Fidelity Canada employees fundraise for the Capes For Kids Campaign

I n normal times, Sacheen Mehta would start his workday at Toronto-based Fidelity Canada by having a casual chat with a colleague or stepping out for a coffee. These days, the dealer relations manager holds a morning huddle – virtually, of course – in which he and his team members raise their mugs of java and start their day with team-building exercises like “Sparkle (Highlight) or Spike (Downfall) to keep everyone up to date.

“We’re just trying to keep things fun,” says Mehta. “Everybody is excited to meet and chat as a team.”

Like employers across the country, Fidelity had to adapt almost overnight to having its entire Canadian workforce operating remotely when the economy went into lockdown in mid-March. “We’ve always had a formal work-from-home program,” says Diana Godfrey, senior vice-president, human resources. “But we never had to make this kind of wholesale change this quickly.”

Business as usual was no longer an option, but a lot of routine business like hiring, onboarding and training still had to be done and Fidelity adapted. “We’re doing orientation virtually and creating virtual teams so new hires know how to contact each other,” says Godfrey. “We also had to look at creating buddies as well as mentors, so newcomers get the support they need.”

Fidelity routinely hires 50 to 55 summer students and had already made offers to the 2020 cohort when the lockdown began. Godfrey says the company decided to go ahead with the program but called each student and gave them the opportunity to opt out if they weren’t comfortable working remotely. In the end, everyone accepted the offers.

The company typically recruits heavily from university-level business and commerce programs and recently entered partnerships with two post-secondary institutions to broaden the pool of potential candidates. In addition, it has created scholarships for women in the business program at the University of Guelph.

The company has also entered into a three-year partnership to sponsor a series of boot camps run by the Ted Rogers School of Business at Ryerson University in Toronto. The camps are weekend-long sessions in which students have the opportunity to explore in depth subjects that may not be covered as part of their programs. This partnership also provides Fidelity with the opportunity to deliver virtual Master Classes. The first, attended by close to 50 students, covered topics such as delivering effective presentations and effective communication skills.

“We think it’ll be a great way to find students we wouldn’t traditionally find through our co-op office,” says Godfrey.

Mehta’s job involves managing the 180 registered dealers across the country who can sell Fidelity mutual funds and other financial products to retail customers. Normally, he travels four times a year to Montreal, Vancouver and several other cities for face-to-face meetings with dealers.

“We miss the social interaction that goes along with meeting in person,” says Mehta. “That said, Fidelity has done a great job providing us with the tools and technology to get the job done.”

The company has done more than just provide technology solutions. Fidelity contracted with a consulting firm that provides online health support, such as arranging virtual doctor’s appointments and filling prescriptions. “We wanted to take the strain off the employees and their families so they could focus on their well-being,” says Godfrey.

She adds that the company has also drawn on the personal skills and creativity of employees to enliven the new virtual workplace. On Fun Fridays, employees host many interesting sessions such as yoga, woodworking class, beer-making, kombucha making, photography tips and a cello recital. “It’s been fun, a great way to build community,” says Godfrey. 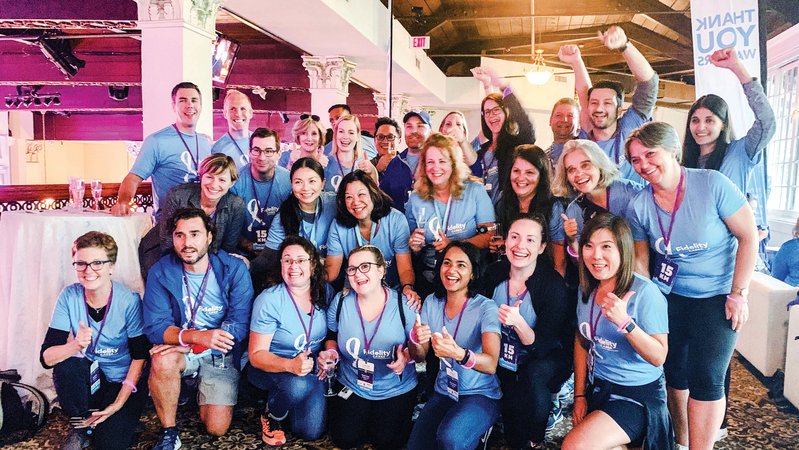 Since joining Fidelity Canada in the summer of 2019, Mengting Li has taken full advantage of the rich suite of learning and development workshops, as well as online resources, the company offers to its employees. Among others, she has participated in sessions on communications skills, how to hire the right people and how to retain top talent.

“But there’s one more I really look forward to,” says Li, who is manager, finance. “It’s called embracing change, which is especially relevant in today’s world.”

Indeed, change of an entirely unexpected nature has been thrust on almost every aspect of daily life this year due to the COVID-19 pandemic. Employers as well as employees have had to adapt. “It really has been quite a dramatic change,” says Diana Godfrey, senior vice-president, human resources. “We have proven to ourselves that we can work differently.”

All but a small cohort of Fidelity employees are working from home and many, like Li, had never worked remotely for an extended period of time. That meant establishing new routines with colleagues to take the place of in-person meetings or casual chats to get the day started.

“I have a daily meeting with my team, virtually of course,” says Li. “We like to have cameras on because it increases engagement. Even though there are no face-to-face meetings in the office, we’ve still managed good effective communications.”

Setting up a home office was another challenge, but Fidelity has provided plenty of support. “We’ve reimbursed people for office supplies, including chairs, desks and keyboards to name a few things,” says Godfrey. “People could book time to go to the office to pick up personal effects and we shipped out monitors to several employees.”

Fidelity has introduced several measures to keep the workforce connected and engaged throughout the pandemic. "I think we’ve created great opportunities for the employees to shine and we strive to do more,” Godfrey says. “We also had a mechanism for them to report any help they needed and we brought in an external firm to provide online health support.”

The company has even managed to retain service award luncheons for employees who have put in five, 10, 15 or more years with Fidelity. A member of Godfrey’s team came up with a way of holding the events remotely. They have pizza delivered to each honoree’s home half an hour before the start of a Zoom lunch.

“We have a conversation with the employees,” says Godfrey. “They tell us what challenges they’re having, what’s working and what’s not. It’s been a lot of fun.”

Fidelity has gone well beyond supporting employees. The company has introduced a community outreach initiative to help Food Banks Canada, given the increased use of local food banks throughout the pandemic. For every dollar employees donate, the company contributes $2.

The company also launched a social media campaign called Fidelity Heart Challenge which encouraged everyone, including employees, their family and friends, to create a short video or take a selfie of themselves holding a paper cutout of a heart. They post the image or video on their preferred social media platform tagged with #FidelityHeartChallenge and the company donates $5 for each hashtag to Food Banks Canada.

The goal was to raise $50,000. The target was quickly reached and surpassed.

Recognized as one of Canada's Top Employers for Young People (2021):

Here are some of the reasons why Fidelity Canada was selected as one of Canada's Top Employers for Young People (2021): 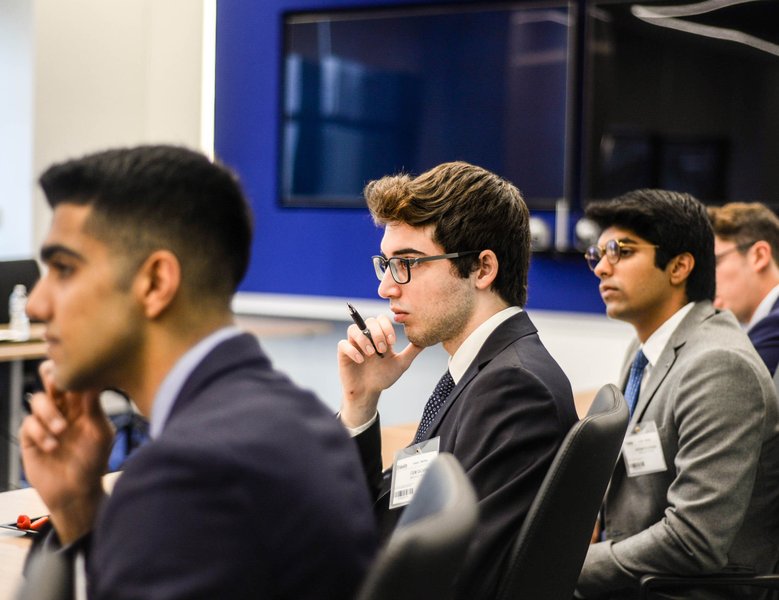 University students participate in a networking session at Fidelity Canada 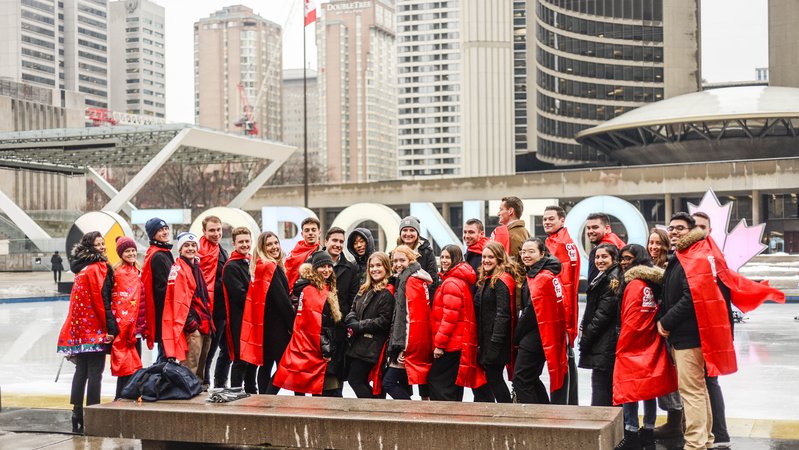 As an accounting major at University of Guelph, Jasmeen Sidhu got a good look at the career opportunities at Toronto-based Fidelity Investments Canada. She did three co-op terms in her final three years as a student – each time working in a different department.

“That’s what kept me coming back,” says Sidhu, who has started her career as a financial analyst. “I knew I would be able to explore new areas of the company.”

Fidelity hires, on average, 48 students for its fall and winter programs. In the summer, it’s typically closer to 60. “We’re looking to build talent pools that we can tap into,” says Linda Passarelli, vice-president of talent management. “We’re invested in the success of our young people. They’re the future of our success as a company.”

Each cohort receives a week of training to develop various skills including etiquette, networking and presentation skills. For the latter, says Passarelli, the company retains a leading outside expert. As well, managers and senior executives from various departments address the students.

“It was really eye-opening,” says Sidhu. “You were exposed to the whole company.” The company organizes weekly events through each four-month co-op program, including networking gatherings with hiring managers. Fidelity also holds a case competition in which students working in teams are given a real business problem to solve.

“They present their solutions in front of senior executives and the top three teams get to present to the presidents,” says Passarelli. “The students blow you away with their intelligence, research skills and creativity.”

Fidelity has a multi-level training program for young people who are starting their careers in sales. They deal with banks, credit unions and other financial institutions, as well as independent financial advisers who sell Fidelity mutual funds to the public.

Each level involves four to five weeks of instruction spread out over several months. At the end of a session, the company holds a graduation dinner. “The program takes them from the most junior role right to the top,” says Passarelli. “We’re always looking at our internal sales talent pipeline to fill any role that comes up.”

The company has a voluntary mentorship program for younger employees. “We encourage them to apply right away so they get support throughout the organization,” says Passarelli. “Mentors come from all levels. A lot of senior executives have also signed up to receive mentorship from our younger employees.”

In 2020, the COVID-19 pandemic presented a unique challenge to a company that promotes training, mentoring and networking opportunities for employees and co-op students alike. Fidelity honoured the commitment made to the 58 students for summer employment. With almost everyone working from home, the leadership team has adapted to “keep a sense of community with everyone dispersed,” as Passarelli puts it. They’ve made public speakers available virtually, distributed food gift cards and given everyone a “thank you day” – an extra paid day off.

In at least one case, employees have stepped into the breach. Early on, Jasmeen started a “coffee walk” chat group with several young colleagues she normally gets together with for a mid-afternoon coffee break. They started as a group of four or five who connected on Tuesday and Thursday afternoons.

“On Thursday we started inviting a special guest and the group has grown every time,” says Sidhu. “Our CEO and other members of the senior management team have dropped in. They’ve found it a great way to reach out to employees.”

Fidelity Canada has been selected for The Career Directory, our guide to entry-level recruitment for recent college and university graduates. 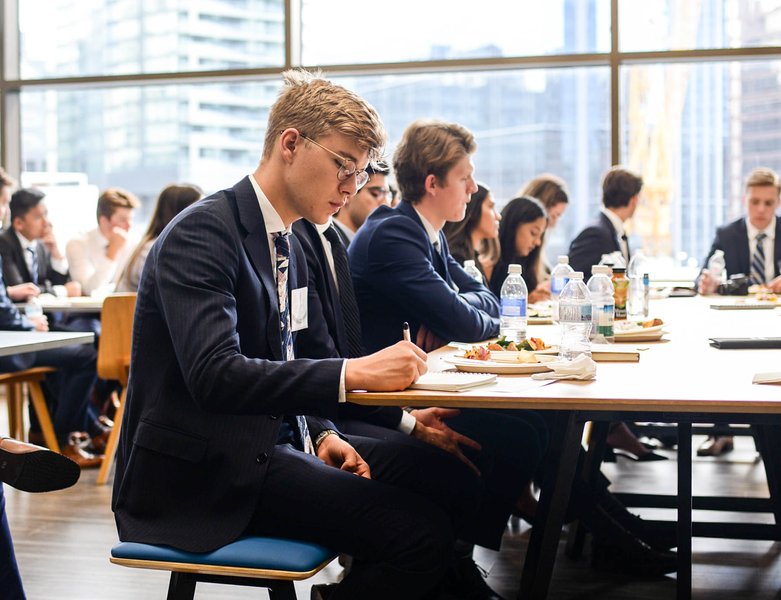