520 Gorge Rd E
PO Box 9861
Victoria, BC V8W 9T5
BC Transit coordinates the delivery of public transportation across the province with the exception of those areas serviced by TransLink in Metro Vancouver.

BC Transit employees hold a meeting

Here are some of the reasons why BC Transit was selected as one of BC's Top Employers (2021): 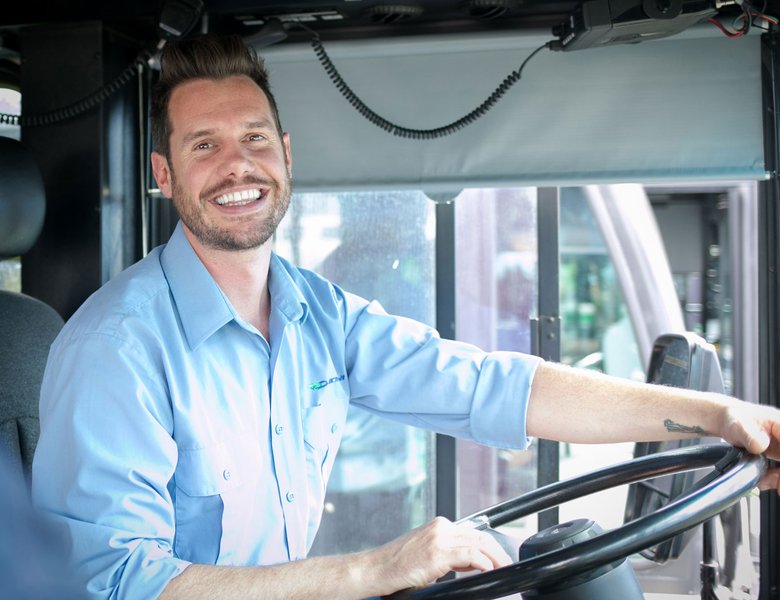 A bus operator at BC Transit 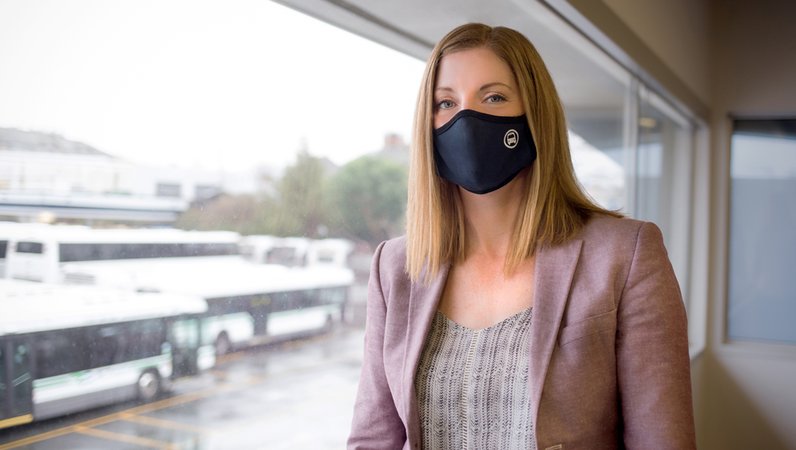 Erinn Pinkerton, president and chief executive officer at BC Transit 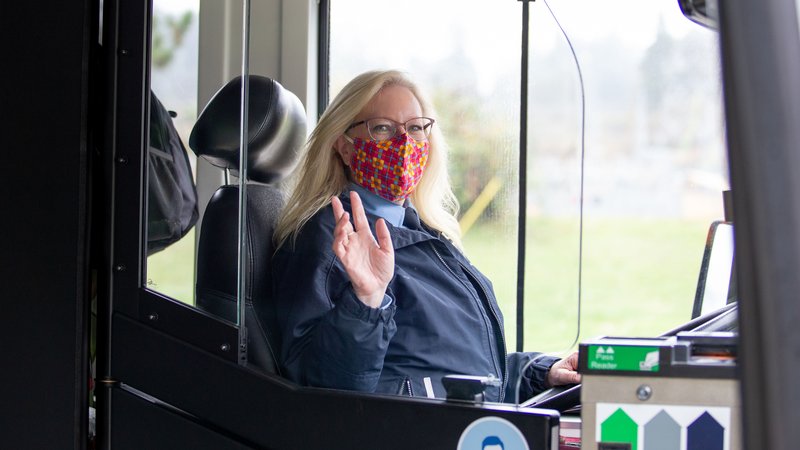 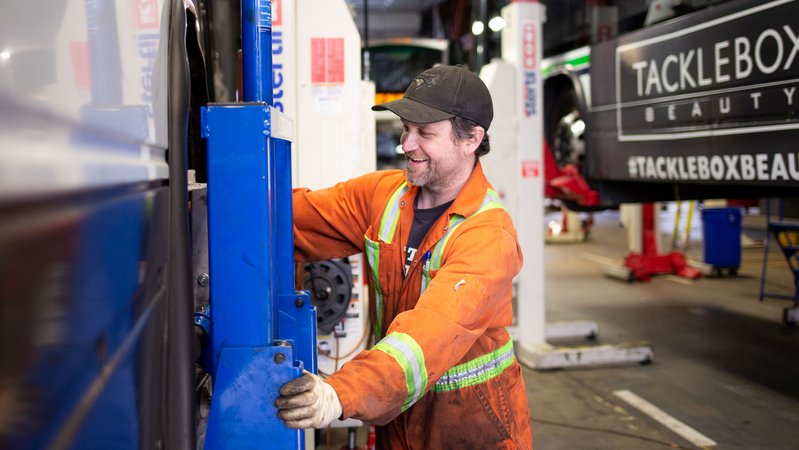 BC Transit maintenance staff located at the Victoria Transit Centre 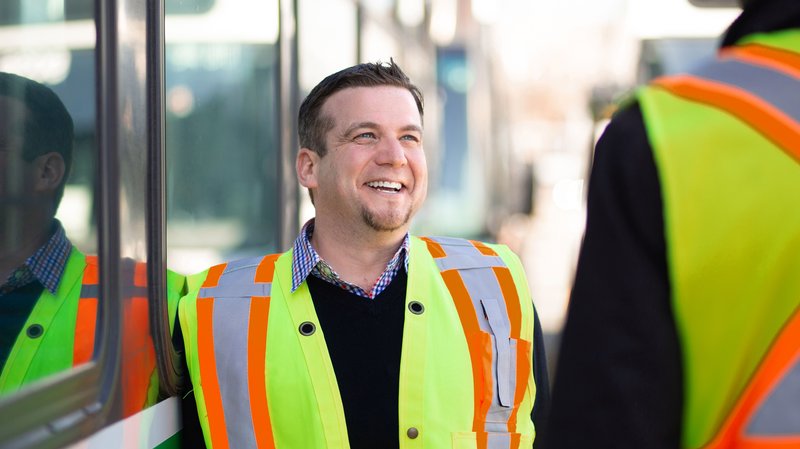 BC Transit keeps the buses running safely for all

As the impact of COVID-19 became apparent in March 2020, BC Transit put more emphasis than ever on its number-one priority: safety.

The provincial Crown corporation equipped its administrative staff to work from home. But its drivers and service teams had to remain on the job.

“We had no choice,” says CEO Erinn Pinkerton. “We’re an essential service.”

Responsible for the delivery of public transportation in 130 communities throughout the province, BC Transit took immediate measures to enhance the safety of its drivers. Each bus displayed an automated message, informing passengers about social distancing and other precautions. Boarding was allowed only through the rear doors, and each bus was thoroughly cleaned to a higher standard than ever.

BC Transit buses were also very quickly equipped with a temporary vinyl barrier that kept drivers safely removed from contact with the public. The vinyl barriers have since been replaced with permanent full driver doors, an initiative that was completed ahead of schedule.

“Not one day did I feel unsafe,” says Sandra Hunt, a driver in Victoria for 17 years.

Hunt also felt reassured by the efforts of management to keep employees informed. “From day one, we received videos from the CEO,” she says.

The videos not only emphasized health and safety, they also kept employees up to date on new developments related to COVID-19, including the way it’s transmitted on surfaces and through airborne particles.

“Most of all we tried to make sure that people knew why directions were changing," says Pinkerton.

Management maintained contact with staff working from home, as well, making sure that they remained supported in their work and engaged with their co-workers. “Our employees are just as productive as they were before COVID-19,” says Pinkerton.

The organization had already begun a transition to a more flexible work environment, which will continue long after the pandemic ends.

“Employees like a flexible work environment,” says Pinkerton. “In the future, they’ll come in a couple of days a week and work from home for the rest of the week, and instead of using a dedicated cubicle, they’ll share work stations. It facilitates more productive energy.”

With commuters now working at home, COVID-19 has drastically reduced ridership on BC Transit and disrupted the routines of Hunt’s regular passengers.

“A group of men used to meet every morning for coffee at a restaurant on my route,” she says. “Now they have nowhere to go, so some of them just ride the bus.”

BC Transit has been selected for The Career Directory, our guide to entry-level recruitment for recent college and university graduates. 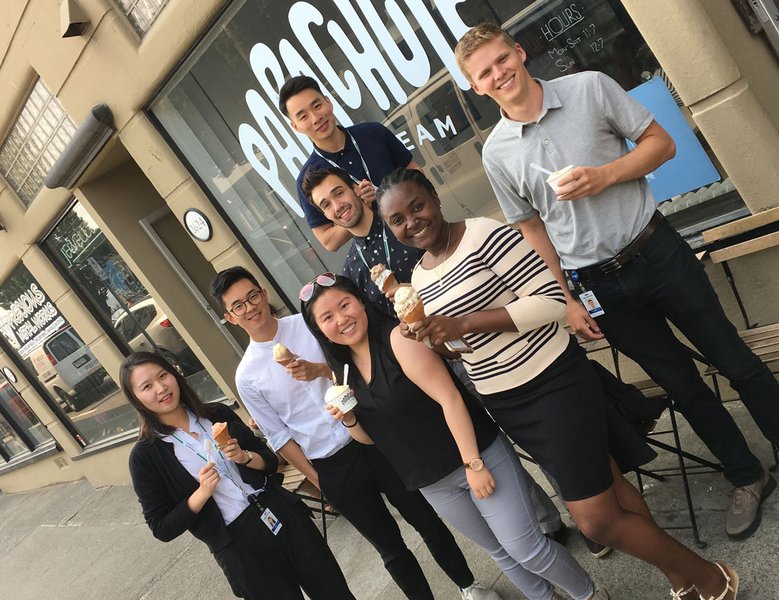 Co-op students at BC Transit

Search all jobs from BC Transit Live search powered by Eluta.ca