5025 Creekbank Rd
Building A, Floor 2
Mississauga, ON L4W 0B6
BASF Canada Inc. is a chemical company that produces agricultural and nutrition products, chemicals and plastics. 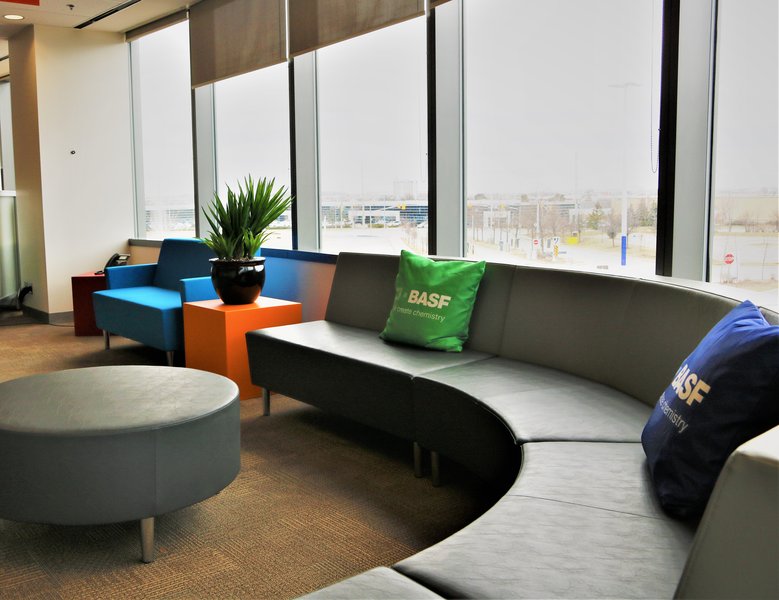 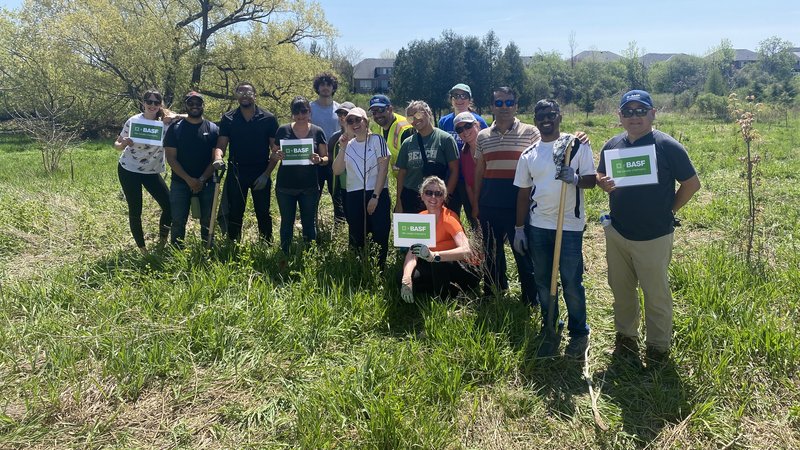 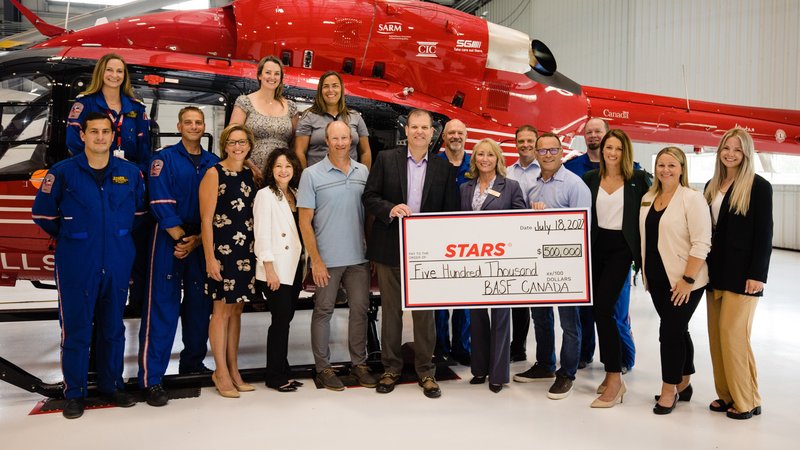 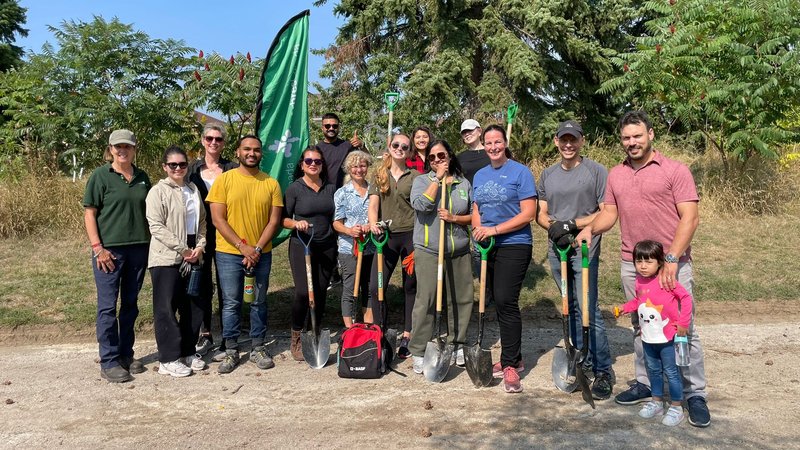 Planting trees alongside her colleagues from BASF Canada Inc. last May, Marlena Mista saw them in a different way than on the production floor or behind their desks. Sure, it was hard work digging holes the right size and packing the soil – but people had fun helping each other and were proud of the 130 trees they’d planted that day beside a local walking trail.

“Tree planting has been an exciting activity to bring employees together and engage in communities across Canada, particularly where we live and work,” says Mista, communications manager at BASF Canada Inc., a world-leading chemical manufacturer with Canadian headquarters based in Mississauga, Ont. “We really focus on aligning our social engagement with our business values, so sustainability is an obvious choice. We’ve also been offering activities where all employees can engage and learn, not just by donating to a cause that we care about, but actually physically making an impact.”

The employee response has been so enthusiastic that people often ask to bring their families along, she says. Much of the company’s social engagement is employee-driven.

“We create chemistry for a sustainable future, so the three areas we focus on are sustainability, STEM education – such as our BASF Kids’ Lab, which is a series of free, hands-on, chemistry-focused experiments for kids six to 12 years old – and diversity, equity and inclusion,” says Mista. “It’s something our employees know that as a company we stand for, but it’s also very rare to find an employee who isn’t personally passionate about one of these three areas. That’s why we’re getting such high participation in all our social engagement activities across Canada.”

Employees also want the company to support local organizations they care about and that make a difference, so BASF has a matching donations program as well as paid time off for volunteering. BASF’s agriculture business recently made a $500,000 donation to Calgary-based STARS air ambulance, winning very positive feedback from employees.

Nicholas Chaffey, head of people for BASF Canada and a member of BASF’s Canadian leadership team, says that having these core areas of focus and alignment is helpful for employees to understand where the company is directing funds and where they want to create value and impact from a societal perspective.

As executive sponsor for the recently formed Social Engagement Committee, Chaffey says that it’s not just this corporate entity deciding where it’s going to allocate funds to certain charities, but really a group of senior leaders, managers and employees across businesses as well as geographically across the country.

“Bringing that group together and seeing the collaboration in the creative ideas of employees across the organization is quite exciting,” says Chaffey. “There is an energy, enthusiasm and passion to also bring the rest of the employees on board to be ambassadors and spokespeople. That’s helped amplify the existing initiatives we have and is getting us back on track in facilitating volunteering for Kids’ Lab or coordinating Run for the Cure across the country, and other social engagement activities driven by the company.”

With colleagues coming back into the office, Chaffey says the company felt people needed a strong sense of purpose and intent, and to engage with each other and do things face to face that they couldn’t do before.

“People were excited to get back together and energized by some of these initiatives, such as planting trees,” says Chaffey. “Seeing that all come to life so crisply in such a short period of time has been the highlight for me over the past two years.”

This article appeared in the magazine announcing this year's Canada's Top 100 Employers winners, published November 18, 2022 in The Globe and Mail. This article was prepared with the financial support of the employer, which reviewed but did not write its contents 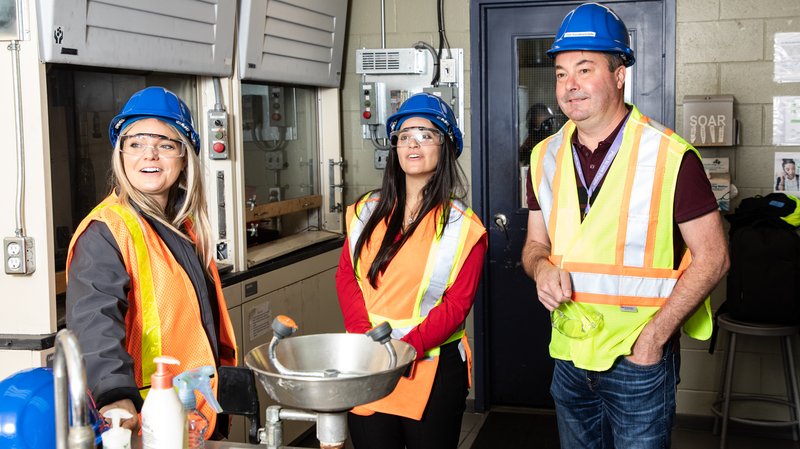 Employees talking chemistry at one of BASF Canada’s manufacturing facilities

When Gladys Rose Bamba interviewed for a job at BASF Canada Inc., a world-leading chemical manufacturer, earlier this year, one of the major draws was its competitive total rewards compensation and benefits package. The company recently announced new enhancements after an overall benefits review based on employee feedback.

Surprisingly for Bamba, a millennial and now a talent acquisition advisor at BASF, the company’s pension plan and RRSP benefits were top of her list, right up there with its wide range of learning and development opportunities.

“People say I’m young to be thinking about pensions, but I want to look ahead to make sure I have a stable future in the long run,” says Bamba, who came to Canada as an international student. “Not only does BASF contribute to my pension, it also matches my voluntary pension contributions dollar for dollar, so they're putting in money for my future – that’s huge.”

Flexible health benefits were another attraction, as Bamba feels strongly that wellness is critical in a world still reeling from the pandemic. She appreciates that her flexible benefits allow for massage and chiropractic treatments which she says helps her feel healthier and more productive after sitting at her computer on workdays. Being able to take a week’s vacation three months after starting was another nice perk she hadn’t expected.

“It’s so important to pause and disconnect for your mental health,” Bamba says. “BASF has made this easier for me to do with generous vacation days, as well as a fitness and wellness reimbursement program. I’m able to join fitness classes and buy workout equipment without stressing about the costs.”

Vacation entitlements are just some of the company's significant updates in its holistic review. Nick Chaffey, head of people, says that the total rewards umbrella includes pension plans, employee and family assistance programs, flexible work options and much more.

The review process included employee surveys and an extensive number of employee focus groups where people could voice their opinions and share what they value.

“The process, which had to be virtual at the time in 2021, was extremely valuable for the employees,” says Chaffey. “It wasn’t sitting around a table behind closed doors and deciding what’s best just based on industry feedback and trends. We really took a bottom-up approach with employees contributing and engaging during the process. This allowed us to build a holistic approach focused on internal employee feedback and research.”

Chaffey says the feedback from employees has been overwhelmingly positive, particularly on health benefits. The company “very much looked at family elements” and individual offerings when it came to coverage, an important point as many employees are mid-career with families.

“One of the changes was to introduce a robust health care spending account that’s completely funded by the company,” says Chaffey. “It allows for a lot more flexibility where people can draw from that fund and utilize it the way they want versus being tied to a fixed benefit model. Another was an overall increase in vision and dental benefits, which was a big ask from employees. We heard them and made that increase.”

Bamba says what she appreciates most is how much the company listens.

“It’s one thing to ask for feedback, but then having an action plan, doing it right away and communicating it clearly really reinforces the culture of engagement in this company,” says Bamba. “I feel valued as an employee. There’s so much power in collective feedback.”

Recognized as one of Canada's Top Employers for Young People (2023):

Here are some of the reasons why BASF Canada Inc. was selected as one of Canada's Top Employers for Young People (2023): 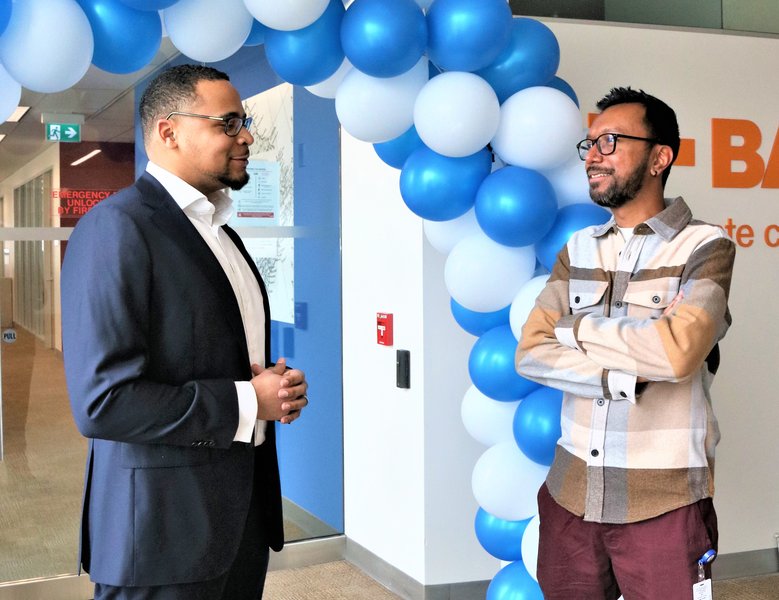 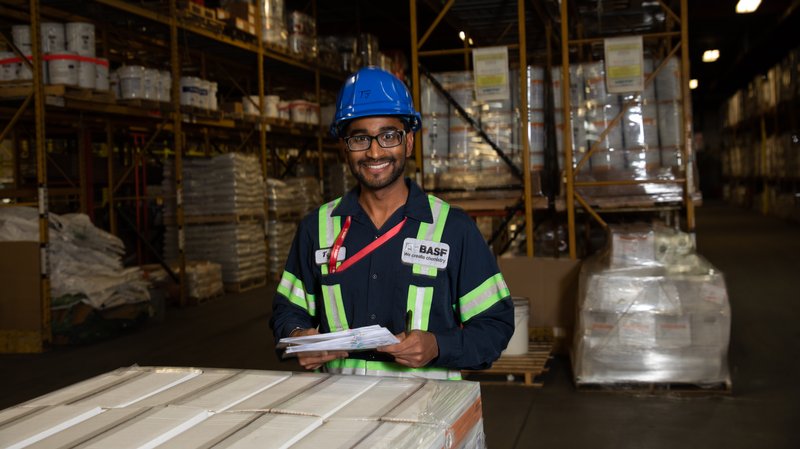 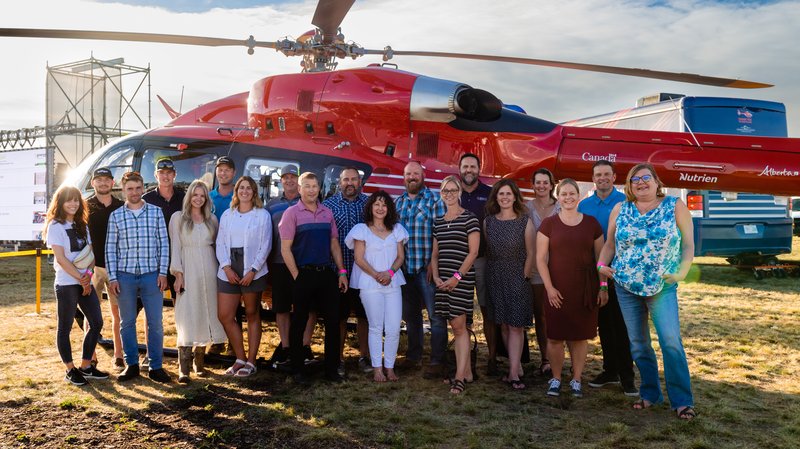 It was a unique job posting that alerted Anique Josuttes to an enticing opportunity at BASF Canada Inc., a world-leading chemical manufacturer.

Armed with her bachelor of agronomy and master of science degrees from the University of Saskatchewan, the recent graduate wasn’t sure what direction to take next in the agriculture business, so BASF’s professional development program (PDP) appealed to her. While she hadn’t interned as a summer student at the company previously, many of her friends had, and they had lots of great things to say about BASF as an employer.

“The posting stood out in that it was an opportunity to spend a year in one part of the company, either in a sales and marketing rotation or a research and technical services rotation, and then move to a different area for the second year – so you got tons of exposure and experience in different aspects of the business,” says Josuttes, now full-time as a technical marketing specialist – seed solutions. “It was a really good chance to test the waters, see what BASF had to offer and where my true interest lay.”

During her time in the program, Josuttes had opportunities to interact with both marketing and research and was able to shadow several technical service specialists in different areas.

“They really push you to get the most out of that short time-frame so you can put all the different parts together and make a decision at the end,” says Josuttes. “Every single manager put in the time to allow me to really highlight my strengths and help me learn more about them. Ultimately, it did help me understand my goals and where I wanted to go in my career.”

Jonathan Sweat, vice president, business management BASF Canada Agricultural Solutions, says the company has a number of initiatives for younger folks to get them hooked into the agricultural industry. Each year, BASF hires around 150 interns to do a variety of positions and has anywhere from six to nine people in the PDP, working on real projects in either sales and marketing rotations or technical and research rotations. While the intern pool is a feeder program, it’s not a prerequisite.

“We have the largest agricultural presence in Canada, which allows us to attract people that maybe wouldn’t necessarily look at agriculture, so we bring people in from more than just agricultural backgrounds,” says Sweat.

“If they come in with an ability to learn and a real curiosity, then we can teach them and give them real-life experience. The PDP lets them test drive who we are and vice versa. They’re there as employees, so we treat them as employees and expect to place them in permanent positions when they’re done.”

Sweat believes that one of the key drivers for the program’s success is that BASF has many people who like to teach and help others learn. The company’s collaborative culture also really comes through, which strongly appeals to the younger generation.

“Young people get good support because people are kind of wrapped around them and able to help them learn the business and grow into the role that they want to take in the organization,” says Sweat. “People here enjoy working together and working in teams. That’s just who we are at the core, and we talk a lot about what we call our CORE values.

“C is creative, O is open, R is responsible and E is for entrepreneurial. We live those values every day.”

This article appeared in the magazine announcing this year's Canada's Top Employers for Young People winners, published January 24, 2023 in The Globe and Mail. This article was prepared with the financial support of the employer, which reviewed but did not write its contents.

BASF Canada Inc. has been selected for The Career Directory, our guide to entry-level recruitment for recent college and university graduates. 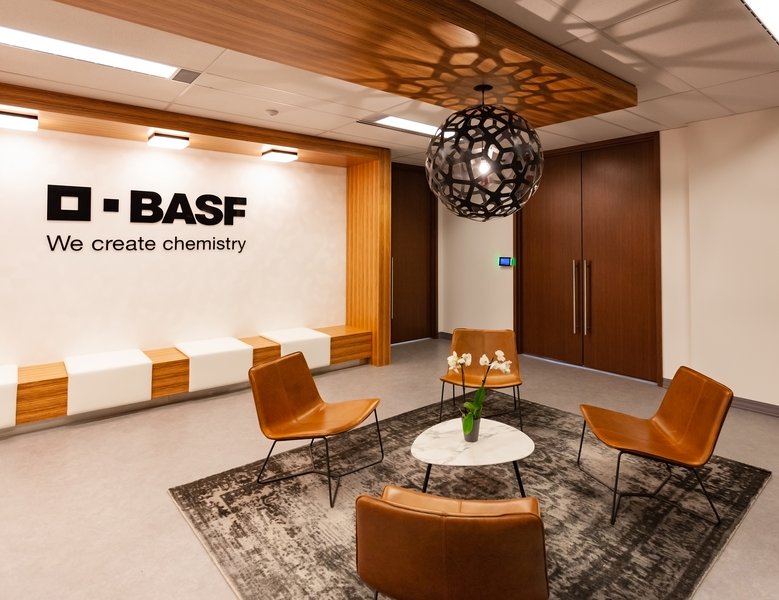